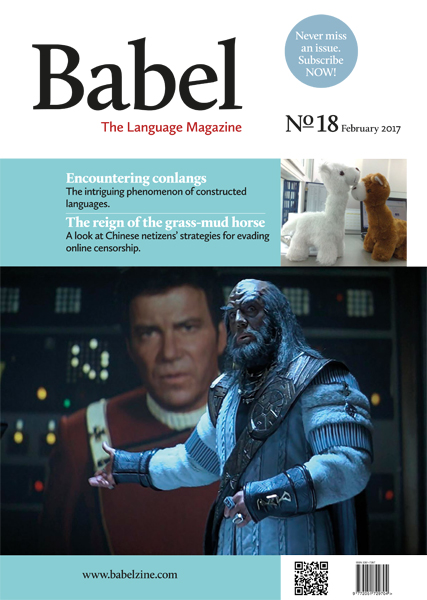 Babel No18 (February 2017)
Articles
Encountering Conlangs – Deak Kirkham investigates the intriguing phenomenon of constructed languages
Reign of the Grass-mud Horse – Susanna Wickes looks at strategies for evading censorship on the Chinese internet
Opportunity vs. Identity – Jon Reyhner looks at the negative effects of assimilationist educational efforts that sought to ‘civilise’
The Case of Double Negation – Naomi Gradwell on the history of a linguistic bugbear

Regular features
Ask a Linguist – Have nouns in German always been capitalised?
Language Games – Morphological motifs
Language in the News – Language prejudices in court
Languages of the World – Malcolm Hebron on Catalan
The Linguistic Lexicon – Babel brings you the letter R
Lives in Language – Siobhan Chapman on L. Susan Stebbing
Meet the Professionals – Babel meets speech-language pathologist Holly Shapiro
Pull-out poster – How we can mean more than what we say
Reviews – Michael D. Gordin’s ‘Scientific Babel’; Judy Hochberg’s ‘101 Questions about Spanish’; Robert C Berwick and Noam Chomsky’s ‘Why Only Us?’

Bacl tp Babel Issue Guide
We use cookies to ensure that we give you the best experience on our website. If you continue to use this site we will assume that you are happy with it.Ok