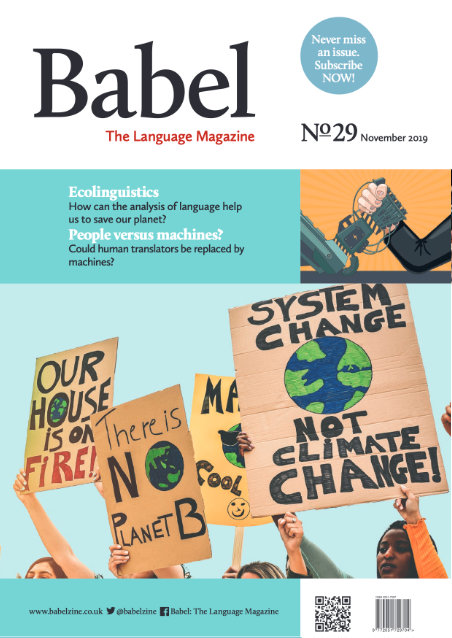 Articles
Ecolingusitics – Josh Coombs looks at how discourse analysis can help us save the planet People versus machines? – Vanessa Hu looks at the advantages and disadvantages of a new age of translation
A brief history of cant – Ahmad Alharthi looks at early accounts of the language of the ‘underworld’
Fundamental forces of the mind – Giosue Baggio and Andrea E. Martin look inside the brain to find out what holds thoughts and sentences together
Afrikaans – Frederick Hale examines the hybrid language at the centre of racial politics in South Africa
Borers, Chockers and back rippers – Natalie Braber discusses her research into the language of the mines

Regular features
Ask a linguist – Where do linguists now stand on the Chomsky/Pinker nativist model of language acquisition?
Diary of a linguist – Katie Wales’ latest observations on the language around her
Language games – Corresponding consonants
Language in the news – Hip-hop’s role in preserving the ‘language of resistance’
Languages of the world – Claudia Bensi on Papiamento
Linguistic horizons – Charlotte Sant discusses his work on gradability
Lives in language – Jesse Sheidlower profiles Reinhold Aman
Reviews – Marcello Giovanelli and Chloe Harrison’s ‘Cognitive Grammar in Stylistics’, Emmy J. Favilla’s ‘A World without “Whom”‘, Dominic Wyse’s ‘How Writing Works’

Back to Babel Issue Guide

We use cookies to ensure that we give you the best experience on our website. If you continue to use this site we will assume that you are happy with it.Ok