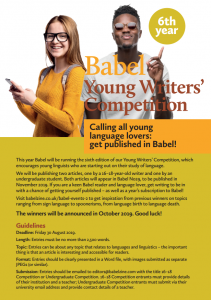 Babel launched the Young Writers’ Competition in 2014, inspired by an article we published by young linguist Kateryna Pavliuk on British Sign Language. In 2015, we introduced two different categories – one for 16-18-year-old linguists, and another for undergraduate linguists.

You can read all of our Young Writers’ Competition winners below. Keep an eye out for details of our 2020 competition, which will open in spring 2020 and close at the end of August 2020. competition is now open, with a 30 August deadline for entries. Our winning linguists will be published in Babel No33, to be published in November 2020. The winner also, of course, receives a year’s subscription to Babel!

Entries should be between 1,500 – 2,500 words in length, and can discuss any topic to do with languages and linguistics. The winners are announced in October of each year. Submit your entries or any queries you may have to the Babel editors.

You can also get inspired by reading our previous winners!

2019
Undergraduate winner: Josh Coombs – Ecolinguistics: How discourse analysis can help to save our planet
16-18-year-old winner: Vanessa Hu – People versus machines?: Past and future changes in how we translate

2018
Undergraduate winner: Claudia Bensi – From ‘cookie’ to ‘boss’: How Dutch influenced US language and society
16-18-year-old winner: Kiana Rezakhanlou – Language and nationalism: One nation, one language?